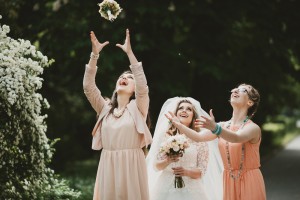 The wedding day often goes hand-in-hand with tradition. It is often what defines much about the big day and how it is even planned.

From elaborate ceremonies to the subtle acts of good luck – they are often incorporated every step of the way. But for many of us who feel the need to have traditions as part of our wedding day, there’s often not a lot that’s actually known about why or what exactly those traditions that we’ve grown to cherish really represent and mean.

If your big day is approaching, here are a few facts surrounding five of the most classic popular weddings traditions and what exactly they symbolize.

It’s one of those exciting traditions that’s one of the most popular today for getting the crowd roaring and the bridesmaids fighting for the best chance to grab that lucky bouquet. But the origins of this tradition developed from a time when a bouquet of flowers wasn’t involved. Instead it was the bride’s wedding dress that single women would contend for, as ripping off pieces of it was meant to provide them with good luck.

Over time, rather than having their dresses mauled, this tradition eventually evolved into tossing the bouquet, which initially consisted of aromatic components such as herbs and fruit.

The Ring Finger and Wedding Bands

The third finger on which the wedding bands are worn was a symbolic ritual that originated from Egypt. The circular shape of the wedding band represents eternity, with the central opening symbolizing the doorway into the future, much like the commitment each person makes when taking their vows. It’s placed on the third finger on the left hand since it represents a direct connection to the heart.

The bridal veil became a part of the wedding tradition often for the purpose of shielding the bride’s face from the weather elements. But it is also a symbolic part of the bridal dress that represents purity and virtue.

Of course, similar to the bridal veil, the white wedding dress has also been passed down as a figurative gesture for displaying the purity of the bride. But this was a ritual that only developed during the Victorian era. Prior to that, white was uncommon and brides – especially royal brides – opted from more elaborate colours on the big day.

The garter belt carries a similar traditional belief of good luck as the bouquet tossing. Tradition says that the male who catches the garter will have good luck.